Former Roman roads, and numerous remains of the medieval town are to discover : ruins of the fortified village and of the castle of Vialle, a priory (Cluny style), Saint Blaise church (11th century) and the castle of Pontaujard which controlled the passage along the Lez river at the time.

Not to miss :
The old village
Marked paths and reliefs of cobalt oxide (which can be used to make blue glass), a geological phenomenon of the region
Saint Blaise priory (11th-15th centuries)

A walking path (follow “table d’orientation”) will lead you to an ancient village (La Vialle) on a hill close to  Mountain Lance. 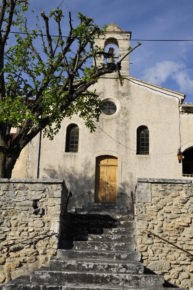